Johnny On The Spot: #RELENTLESS. Manchester City’s relentless pursuit of a first successful Premier League title defence continues but it was given a testing defensive examination by a spirited West Ham who despite often being reduced to paper kite’s in a wind tunnel took the game to The Blues whenever they could.

Each of City’s three first half goals in a match winning opening salvo were beautifully crafted and imprinted with the Pep Guardiola hallmark. 21 goals to 2 for November across 5 games, Pep’s record breakers have now chalked up another accolade in being the first club from outside London to win 6 consecutive games in the capital since Portsmouth in 1968. Furthermore, the last time City kept 4 consecutive clean sheets on the road was way back in 1903.

The timing of this win post international break disruption is ideal ahead of the big Champions League showdown with Lyon on Tuesday night against a backdrop of French civil unrest. The victory is all the more pleasing considering the absence of the injured triumvirate of Kevin De Bruyne, Bernardo Silva and Benjamin Mendy. City eased back on the gas for the second half, invited West Ham to huff and puff on to them and deployed another example of efficient game management.

The eerie stadium fell increasingly silent while City stroked the ball around at a leisurely pace before deciding they fancied scoring a fourth, Leroy Sané my man of the match delivering the consummate finish. 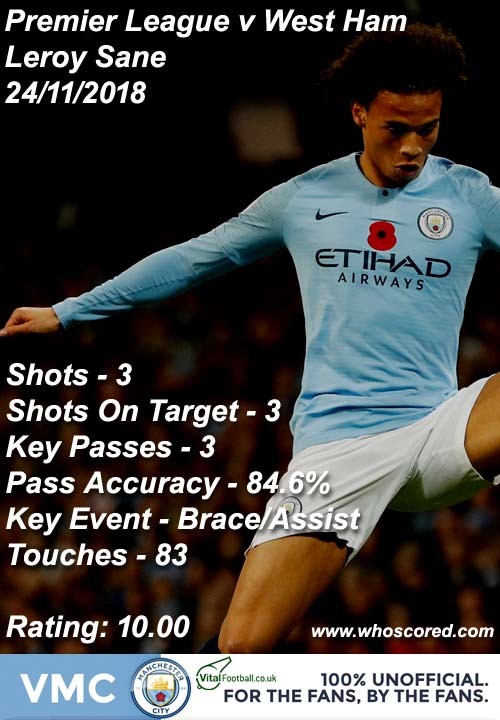