I have a lot of respect for BBC Football analyst Garth Crooks but, on this occasion, I think he has missed a trick by failing to add Manchester City winger / attacking midfielder Riyad Mahrez to his ‘team of the week’.

One could make a case for adding the majority of Pep Guardiola’s team, who thumped Burnley 5-0 at the weekend. However, I won’t be greedy and moan just for the sake of it. Except for this!

The case for Riyad Mahrez vs. Burnley

I wrote my player ratings following Saturday’s Premier League fixture, and in my opinion, Riyad was my ‘man of the match’ and rated him 9 out of 10.

“I have slatted Riyad in the past, but wow, he does have talent. Slick passing, slick movement and a fantastic goal. Poor old Burnley didn’t know how to handle him.

“Can he replicate something similar if Pep picks him in midweek?” 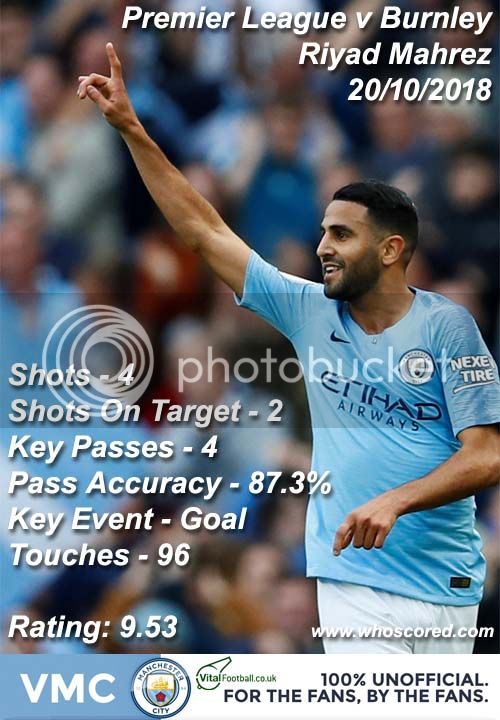 One City player made it into Garth Crooks ‘team of the week’.

This is how I rated our midfield maestro.

“Two minutes after Bernardo found the net and it was Fern’s turn. As the ball came bouncing towards him, the City faithful inhaled with anticipation and BANG. He hit the ball as sweet as a nut with the side of his foot and boom; the ball flew into Joe Hart’s top corner.

“Bossed the midfield as if he owned the joint. Oh, wait for a second….”

Team of the Week, courtesy of the BBC.

Garth wrote: Fernandinho – “I absolutely adore this player. Fernandinho has been as important to Manchester City as Yaya Toure, David Silva and Vincent Kompany over the years. He’s ever-present, seldom gets the plaudits and is always in the midst of the action for City.

“Burnley manager Sean Dyche can whinge all he wants about possible red cards and debate whether the ball is in play or out, but if his players can’t observe the most fundamental rule of football and play to the referee’s whistle then invariably they will pay the price. And they did.”

Your chance to rate the MCFC players vs. Burnley

What do you think?