Manchester City will conclude the 2017/18 season back where it started on the south coast when they travel to St Mary’s to face Mark Hughes’ Southampton on Sunday afternoon.

In some ways it is a fitting way to “bookend” a remarkable journey through the Premier League season. A journey which has seen Pep Guardiola’s vision realised: his transfer activity fully justified; his trust in his squad repaid & his faith in his footballing philosophy vindicated. After the sneering smugness with which his first trophy-less season was dismissed he has delivered an outcome twelve months later with which there can be no argument, no casual dismissal. He did not flinch, he stayed true to his principles and the evidence has been there for all to see. Only the blinkered and utterly deluded could still have doubts about his methodology or coaching ability.

Pep’s desire to ensure that the season did not fade away after the title was secured last month with five games to spare has been palpable. He set his players the task of achieving fresh goals in terms of points and goals scored (job done) and he will remain steadfast in sending his team out on Sunday with the task of achieving one more target – 100 points. What a way that would be to sign off the season.

The style with which the title has been won and the records broken has had the nay-sayers crawling back under their rocks or having to face the reality of their limited ideas and, swallowing their pride, admit that, yes, you can play football the “Pep way” in English football. There will be a time and a place to fully review the achievements of this season but let us set that aside for the moment and turn to Sunday’s game.

Whilst Southampton are not mathematically safe, their superior goal difference (-18) over the other candidates for relegation, Swansea (-27) is such that it is going to take them to suffer a thrashing AND Swansea to mete out a similar goal feast for them to fall through the trap door. City winning 0-5 and Swansea winning 4-0 as the games enter the final minutes would see heart rates among the home fans at St Mary’s rise to epic proportions. Given that the Swans are playing already relegated Stoke City – well, who knows?

Bearing this in mind the odds have to be upon Sparkless setting his side up to not to concede and so I feel we may be in for an attack v defence afternoon with City attaining a high level of possession whilst trying to break down a deep lying flat back 9….or 10. Now where have we seen that before? Their form has been OK over the past six games (W2 D2 L2) but Sunday could very much be about whether they have mentally switched off thinking the job is done or whether Hughes can manage to keep them focused. It may not be a festival of football though.

I expect young Foden and Diaz to make an appearance at some stage to secure their Premier League title winners medals. Anyone mistaking this for just sentimentality on the part of Pep Guardiola could well be mistaken. There will be an element of that I am sure but there will also be another factor at work, another message that he will be sending.

He will be helping to keep them hungry.

He has given them a taste of first team football & they have savoured the experience of what it means to be part of a high-achieving squad. In doing so he has seeded within them the desire to crave this feeling again; he will have instilled in them the belief that this is where they belong; he will have nurtured their willingness to work harder than ever in training, to extend themselves and to grow into becoming full members of the squad, ones who demand to be noticed and who are ready to seize their opportunity when it arises.

He has been investing in their loyalty to the club and creating the foundations for the future.

Talking of foundations – they will have witnessed another marvellous City occasion last Wednesday evening when the club paid tribute to one of the rocks upon which the success over the past decade has been built. The respect that was shown to Yaya Toure before, during and especially after the match against Brighton was outstanding and Typical City. Heartfelt, warm and professional it was throughout merited by a player who, despite some wobbly moments, has made an enormous contribution to the club’s growth and progress – his goals against Stoke and the Stretfords in the FA Cup campaign in 2011; his two goals against Newcastle in the penultimate match of the 2012 season; his outstanding 20+ goal contribution in 2013/14 season; his penalty taking.

Yaya Toure was rightly lauded by fans and team mates alike on Wednesday and his contribution will not be forgotten. A City Legend.

City absentees will be Sergio Aguero and David Silva who has been granted permission to stay in Valencia with his family – an extended leave which no one will begrudge. I don’t expect Yaya to participate in proceedings – how can you top Wednesday’s send off?

It has been a remarkable journey. Let’s end it on a high – let’s get the 100 points!

For the final time of this remarkable season. 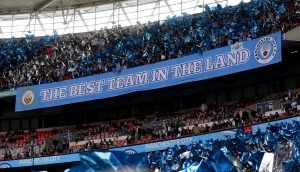